Beginning of a New Era – After Optical Disk Drives (ODDs)

Optical Disk Drives or ODD’s are simple devices which were designed to read/write CDs (Compact Disc), DVDs (Digital Versatile Disc) and Blue-Ray discs. They use a laser head to read and write the data onto the discs. ODD’s come in every laptop on the market today (except in some models) and almost every desktop computer has one or two ODD’s. And don’t forget if you have a CD, DVD or a Blue-Ray player in your home, they too consist of an ODD. For more than a decade optical drives have been a cheap & a popular data preservation method. Before the widespread use of ODDs data was transported and backed up into Floppy disks or by hard disk drives. However, with the requirement of transporting and backing up higher data capacities, these were soon replaced by ODDs. Today the floppy disks and zip disks have been confined to the history books as smaller capacity solutions become extinct and become replaced by technology which was able to satisfy our needs for higher capacity storage solutions.

We use ODD’s mainly for two reasons.

In this rapidly changing industry, it is questionable whether these discs will be enough to serve the capacity needs of the future. If I ask you, “When is the last time you burned a CD?” I’m pretty sure more than 80% of the people would say never or few years back! How astonishing that CDs (like Floppy disks) have slowly gone out of use. Is it possible that in few years DVDs are going to suffer the same fate! With the increase in the capacities of the games, movies and applications, there is a good chance of people moving into bigger capacity solutions. Currently the maximum capacity of a blue-ray disk is 128GB, which is enough to carry as much data as you need. But currently the cost of a blue-ray disc outweighs it’s convenience of storage. Unless these discs are rewritable, you cannot write them more than once. You will have to use that disc for the same files which is written on the disc forever. Today a good resolution movie will be about 4GB upwards. If you try to manage that file in your hard drive with all the games, application and files you have, I’m pretty sure it is going to be a headache. At the same time if you want to carry data, one DVD is not going to be enough.

There is always an alternative to everything. The fast growing industry has offered a solution with flash storages (NOR, NAND). Flash storage includes memory modules that enable storing and retrieving data. They cost a little than typical discs. But they are reusable and lead in reading and writing speeds. Today a pen-drive (flash drive) is something you use to carry your important data in your pocket. Since flash drives are rewritable it is possible to use it for a longer time period. Data transfer speeds are slightly higher in flash drives than typical ODD’s. Best example is SSD (Solid State Drive). SSD’s are used in modern computers simply because of their speed and stability. SSD’s are very expensive, so that the conversion from HDD to SSD takes slowly. There is a huge visible change came with SSD’s loading speed of Operating Systems and performance of the individual applications.

As you can see people are moving towards faster and reliable data solutions to keep up with their day to day duties stress free. Some people even use portable hard drives for their higher capacity data needs. With lower capacities and speeds ODD’s are slowly falling behind. And with SDD’s and USB 3.0, flash drives lead the way to the future. You can refer the below flowchart diagram which illustrates the ultimate guide to diagnose a disk drive. The flowchart is created using Creately, an online flowchart diagramming software. 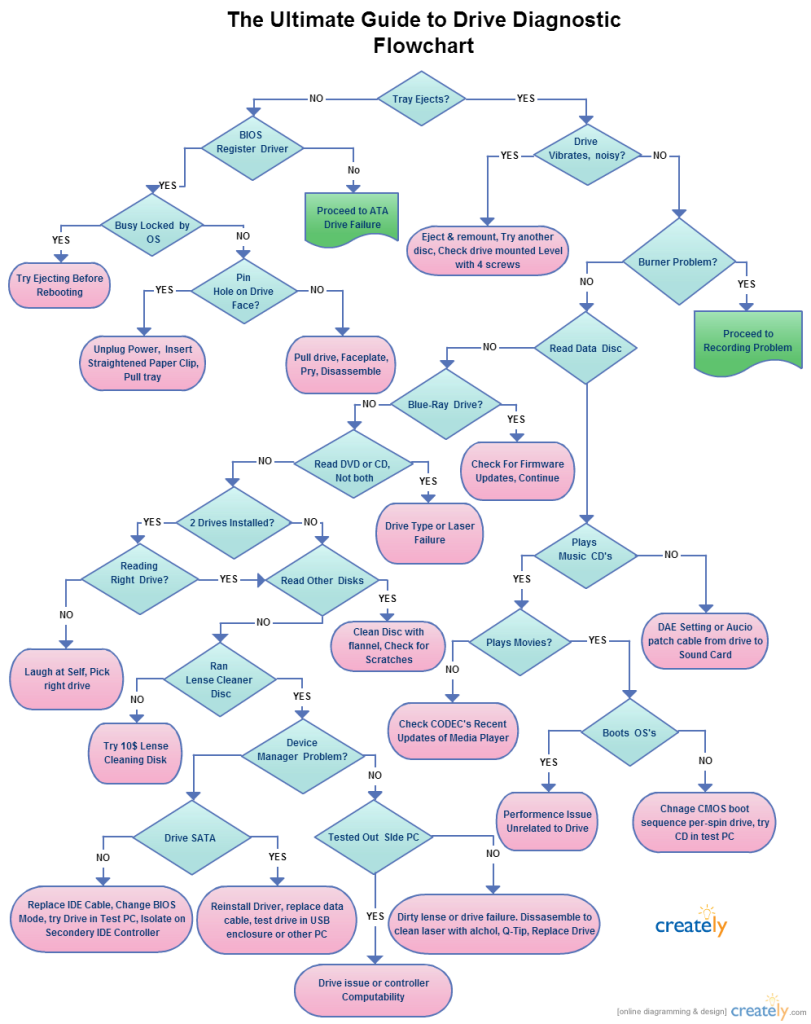 Restoring Viber messages from one PC to another

How to get “WhatsApp Web” option on your mobile device [Android]