Dialog i35 :: A walk-through review 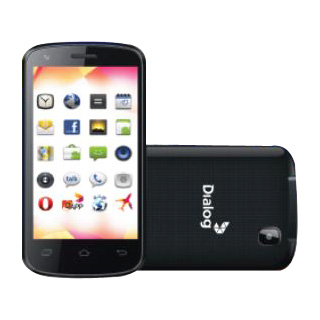 This is how it all started

My friends and family always say that I’m a lucky chap. But I don’t believe in luck thus I challenged myself and tried on my fortune to prove that they are wrong. It was the T20 World Cup season and Dialog Axiata (a well reputed telecommunication organizer in Sri Lanka) came up with contest naming “Wish our lions”. It was opened for all Facebook and Twitter audience. Okay! challenge accepted!!!.. I had tried this with my Twitter account and guess what, unbelievably I won the contest being a runner-up following with a number of votes (200 or so I believe). Dialog i35 which happen to be the first Android smartphone to own in my life.

What is this Iphone?

This is the cheapest Android Smartphone that  an average user can afford to buy in Sri Lanka. Not only that this is the 1st Operator Branded phone, marketed by Dialog Axiata – Nation’s largest mobile network. So!! how much is this smart gadget cost? Anyone can buy this at Rs 8990 (previously it’ was Rs.9990) from any Dialog showroom with 1 year warranty. You may also refer this link, if you’re interested in a pay plan

What are the key features in this mobile?

Basically this device carries a dual-SIM compatibility where 1 slot is exclusively for the provider (locked only to use Dialog network) while the 2nd slot is unlocked (any networks can be used). I later figured out that usable internal memory is around 1.5 GB and you can use expandable Micro SD which supports upto 32GB. following with Bluetooth, WiFi and USB support connectivity.

What’s in the package?

Though it’s a budget phone, packaging is up to it’s standard compared to other smartphone packages. The solid box and a thick protective foam pad which suits the phone, beneath remain the accessories.

I had to make a visit to Dialog’s Corporate office located in Bambalapitiya to collect this. I was so excited to power this up & I was just staring at it but my colleagues wanted to see it right away as they just switched it on. Wooot!! Screen light-up with a greeted dialog logo in a white background and with unexpectedly louder tone. The first impression was not so good as for my expectation while it really made me feel that I got a Chinese crap. Although it didn’t take much time to change my sensation.

Device UI (Gingerbread powered) and the touch capability was up to the standards. Typical screen lock (pattern lock is optional) though the display isn’t great as you can easily draw some scratched lines on it. The reason may be this is being a budget phone and they have used a TFT screen. So I would recommend to use any screen protector to make it usable for quiet a while. Visibility and the pixels are not so good as well. Pixelation can be seen if you look closer but not so disturbance though. It has failed on the daylight legibility which reminds me my Nokia 5500. They have used a solid plastic back cover which is a good move.

What impressed me was the touch input. I couldn’t find any lags whatsoever and much sensitive to use it smoothly. That’s the moment I have realized & made up my mind as this is not a Chinese device. I’m saying it because of the hands on experience of Chinese phone, which one of my friends used (a Clone iPhone 4 that had a touch sensitive which is awful).

Apps, Sounds, Camera and bunch of other stuffs…

Dialog i35 packed with bunch of same default apps which comes on a random Android bunlde such as Adobe Reader, Feature Booster, Office Suites, YouTube …etc. Apart from those you can see some pre-installed apps by Dialog itself as well.

Geek Opinion: If you are looking for a Smartphone under 10,000/= LKR (Sri Lankan Rupees), well this is the one of the best that you can afford for. Dialog i35 is designed for a hard use with a smoother interface. This is an amazing piece of product worth the money.