When you’re into Technology and when you’re so enthusiastic about learning the new trends, you’ll be the first preference always when there’s a new study involved. Likewise, I’ve been handed over to a project where I had to migrate a complete domain from Google Apps to Exchange online (Office365). I must say that migrating user boxes wasn’t a challenge but configuring back to exchange was. Of course, Microsoft does support on these but I wanted to experiment and succeed on my own, which I later did and ended-up having a working exchange. Not to mention, migration as well.

The configuration wizard that is given by Microsoft is very helpful and let’s you configure your domain step-by-step until the verification. However, certain requirements that our management had was a challenge until I figure out it was possible using certain features with the given online tools. I will discuss the prerequisites and stages of Exchange configuration in another post while this is a draft for my later review as I usually do. In this post I will only discuss one of the features that Exchange provides and is called “Transport rule”. Transport rules are similar to the Inbox rules that are available in many email clients. The main difference between transport rules and rules you would set up in a client application such as Outlook is that transport rules take action on messages while they’re in transit as opposed to after the message is delivered. Transport rules also contain a richer set of conditions, exceptions, and actions, which provides you with the flexibility to implement many types of messaging policies.

As per management, their initial request was to capture all the outgoing mails sent from the users on a specific domain and blank carbon copy (also known as Bcc) to a user accordingly. Well, it took a bit of time for me to figure out as I had some others who’s mail should not be copied while the rest should. Moreover, the only option I could think of was transport rules as they do exactly as I require.

How I succeeded adding the Transport rule in Exchange

To start-off with, log in to the Office365 Admin portal with your account information and navigate to Exchange Admin tab (on-top, left corner) and then to Admin Centers, where you’ll see Exchange option as seen below.

Upon selecting Exchange will open-up a new tab with all the required options for an Administrator to configure and troubleshoot with. I’m specifically looking at the Transport rule which can be found as seen below; 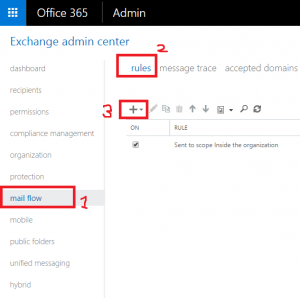 As seen above, select the “+” icon to start creating a rule and fill in the details as described below (see the image below as well) 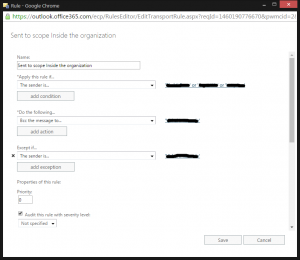 The rest is as seen below 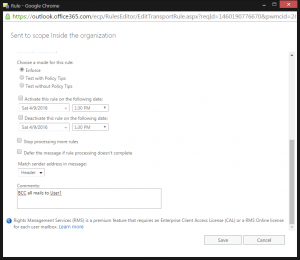 You can have various Transport rules as you require, this was one of the requirement for my management. I had to modify the rule many times by sending plenty of test mails to make sure all are in proper order. I can pretty much imagine this won’t make any sense for the users who’re looking into other issues. However, drop a comment below and I’ll try my best to explain or help resolve your issue.