We wrote an article about LastPass introducing the product and features being a newbie just as everyone was. I must say, LastPass developed their service well since the launch (which was in August, 2008). There are many password managers such as 1Password, KeypassX… etc. But I have found, LastPass to be quite reliable and outstanding in service. As a tech professional, when choosing a service or a product, cross platform support is one major key element we look for. And yes, LastPass happily supports almost all major platforms.

Lastpass predominantly a browser based extension though it has standalone apps for Windows and Mac OS X as well. Unlike other password managers, Lastpass store the password in an online remote location securely. But technically it does work offline for certain instances. That is because the database is transferred securely to the workstation as soon as the user logged in and it will be made available offline as long as the account is logged in. The best part of LastPass is that its free to use over the web. However, you need to be a premium user if you need to use their apps (such as Android, iOS… etc).

What’s so special about LastPass?

Detailed Dashboard – When you choose a password manager, the first thing that comes to your mind is, friendliness of the product. Yes, LastPass has a very clean UI (user interface) and is easy to manage dashboard. I read some post explaining its interface but they are all long gone. The current view of the dashboard simply gives you what you need to see. And the best part is it even crawls the icons of the websites that you save, which is so cool and the way I like.

Cross Platform Support – As I have explained earlier, Lastpass has vast collection and platform support. A quick look at their download page will give users a broad explanation as to how actively they are involved in fulfilling the market needs. What amazed me is their support and detailed information from A – Z. Be it a chrome extension or an offline vault, they have documented each and every bit allowing users with an ease of access.

Security / Challenges – Unlike other online password managers, Lastpass has it own set of security features. It does not just store password, it even indicates the password age (through its routine check), weak passwords, heartbleeds (based on the tech news around the globe).. etc allowing its users to take actions. These all are done through its security challenge features which is quite impressive to have and a must. 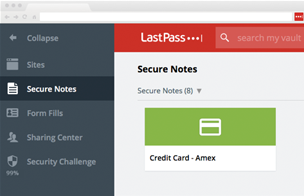 One Step Ahead – Lastpass does not stop managing passwords, it does help the users to have their notes saved securely (called “Secured Notes”). A useful feature which has variety of selection such as passport, identity, license, membership cards… etc. Not enough? users can created their custom secure notes with the fields built.

What else does Lastpass has?

Requirements are unique to each users. However, most of the features are covered and captured in Lastpass. Being an online manager, they even offer an operating system based vault similar to 1Password. so that users may use it offline when internet is not available. And the only provider who currently supports finger-print access to control your vault (if you’re a mobile user). I strongly suggest to look at their listed features and the way it works to clear all your queries. Their latest addition includes an authenticator app of their own similar to what Google offers. It is also known as two-factor authentication due to its second lay of security. This will make sure that unique code is requested by the Lastpass service every time the user logged in.

Visit LastPass’s download page for available options (you’ll be amazed) and do make some time to read their security page for more information. If you have any concerns or question, please comment and I will try my best to answer to them.